Greek philosopher Heraclitus said, “There is nothing permanent except change.” Yet, just because change is a constant doesn’t mean that everyone likes it or that everyone adapts well to it.

SaaS change management is a great example: you might introduce a new app, only to discover employees are still using the old one, or they’ve found a new app they like better than the one you implemented.

SaaS change management doesn’t have to be a failure, though. Read on to learn five tips that ensure a smooth transition to new apps, and how Productiv can help.

Change management is the way in which a company manages how it informs its employees about changes, how it educates them about the reasons for change, and how it implements those changes.

Sometimes, it’s necessary to change the apps in use at your company. Maybe a new app has come out that would better serve your needs, or perhaps there are compliance or security issues with the apps you’re currently using.

The goal of SaaS management is to ensure that employees start using the new app and don’t continue using the old app (or sign up for another unsanctioned app because the new app doesn’t meet their needs). 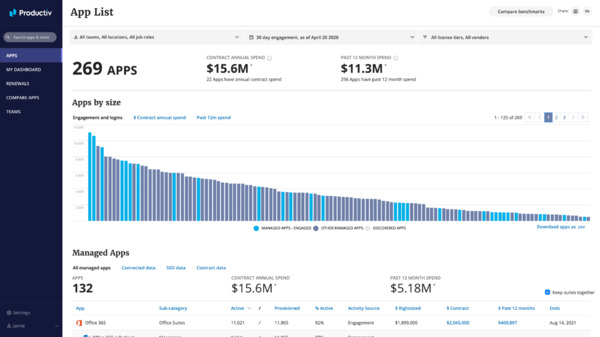 There are five tips to ensure successful SaaS change management:

This is one of the most basic steps you can take in the SaaS change management process. Tracking logins allows you to see who’s using your new app, as well as who’s still logging into the old app.

Productiv allows you to track logins for SaaS apps so you can understand which users have made the switch and which haven’t. However, that’s just the tip of the iceberg of Productiv’s capabilities.

Measuring Engagement with the New App

While tracking logins tells you who’s using which app, it doesn’t show you whether they’re making use of all of the features (especially the premium ones that are supposed to be highly valuable), whether they’re frustrated with the new app, or whether they’re getting work done.

Productiv allows you to measure app engagement by giving you visibility into how employees are using applications. Let’s go back to the point we made in the previous paragraph about premium features – are all of the employees that have licenses using those premium features? Moreover, are there particular teams who are using premium features more than others?

Moreover, Productiv measures engagement over time. Maybe when an app was first introduced, users flocked to it. Over time, adoption might have leveled off. Productiv gives you those insights so you can determine why that leveling off is happening so you can drive adoption again.

Are you achieving your SaaS adoption goals? The best way to determine that is to look at industry benchmarks. Productiv provides third-party data about how others in your industry are using that application.

Setting Goals for User Adoption Based on Benchmarks 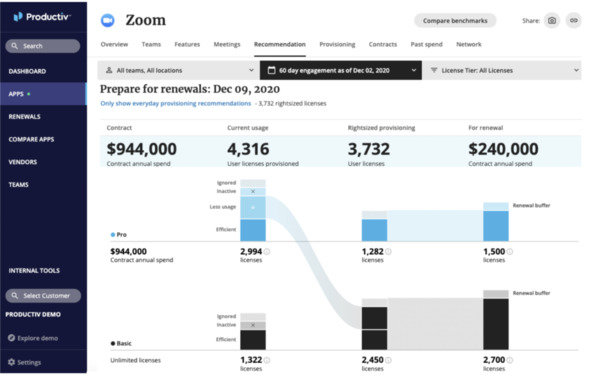 With the benchmarks Productiv provides, you can set goals for user adoption. Fulfilling these goals raises user adoption so employee app usage mirrors that of industry peers.

You can set goals for user adoption by team as well as by feature. If you’re paying a premium for employees to use particular features, you want to make sure you’re getting a good ROI. With data from Productiv, you can set realistic, achievable goals to boost user adoption and ensure a high return on investment.

Here’s a scenario that isn’t so uncommon: a company purchases licenses for an app after the vendor has promised that it will boost productivity and employee effectiveness. Shortly thereafter, employees start downloading other apps in the same category as the one the company just purchased. This is shadow IT at work, and you’ll see it when employees don’t feel as though they have access to the right applications to get their work done.

Productiv gives you insight into shadow IT within your company. It shows you when employees download new apps that aren’t IT-sanctioned, and it categorizes them by type of application so you can see if the app they’re downloading is similar to ones for which you already have licenses.

Aside from the financial cost of shadow IT, unsanctioned apps present compliance and security risks. Many of the apps employees download on their own aren’t enterprise-grade, and aren’t built with compliance standards in mind; moreover, they’re vulnerable to hackers because they’re not designed for enterprise security.

It also means there’s a disconnect between the apps you’re choosing and the apps employees feel they need to accomplish tasks and goals. By identifying shadow IT, the IT department can better understand employees and educate them about the importance of security and compliance.

SaaS change management can be effective and simple with Productiv. Learn how Productiv gives you a kick in the SaaS.