Even though we’re almost a quarter of the way through 2021, some challenges from last year (and even further in the past) continue to plague IT professionals. One of those obstacles is the effective management of SaaS applications and platforms.

To understand what’s at stake for IT professionals, we’ve assembled a list of SaaS statistics. Read on to learn what these SaaS stats mean for your organization.

The SaaS Statistics You Need to Know in 2021

Here are the top SaaS statistics you should know in 2021:

Statistic 1: A Stunning Lack of Visibility into SaaS Tools

According to Productiv research, only 3% of IT executives have complete and real-time visibility into their SaaS tools. That means 97% of decision-makers don’t know exactly what SaaS apps their employees use, how much those SaaS apps are costing the company, if those apps are compliant, or a host of other facts. 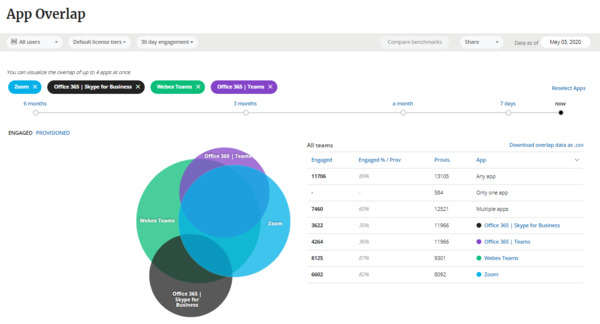 You don’t have to be part of that statistic in 2021. Productiv’s SaaS app management platform gives you insight into app usage, redundant apps, compliance information, app adoption, app engagement, and more.

In the following sections, we’ll explain how that information helps you make better decisions about your SaaS spend.

In Productiv’s 2020 report on the state of SaaS management, 61% of IT executives acknowledged that they have over 100 SaaS apps at their organization 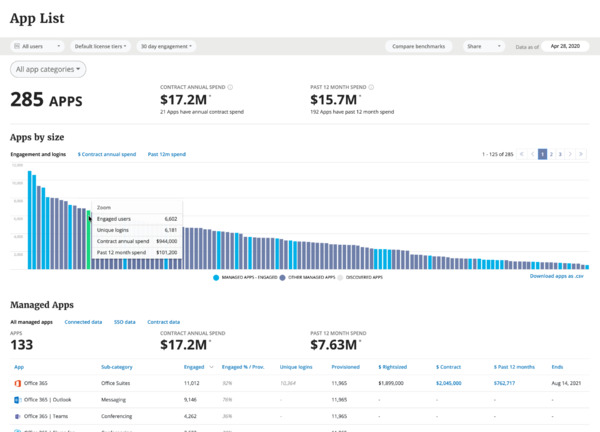 You no longer need to deal with ineffective manual methods to manage SaaS apps. Instead, SaaS management is automated and accurate. In the next section, we’ll talk more about why this is a crucial capability.

Statistic 3: The Average Usage Rate for an App is 47%

Productiv’s research shows that an app’s average usage rate is 47%. Yet, about 29% of apps have a usage rate of less than 20%.

Let’s go back to Statistic 2: most organizations use at least 100 apps. That would mean that at least 29 of those apps aren’t used very much.

If IT professionals don’t have visibility into their applications, though, they have no idea which apps aren’t being used, and they’ll continue to spend money on these subscriptions.

Research from Productiv uncovered that 41% of enterprise apps aren’t managed (meaning no one pays close attention to things like renewal dates, licenses, app usage, security, and compliance). Moreover, on average, a company has 78 discovered apps and 110 managed apps. That means most companies are only aware of 59% of the apps in their company. 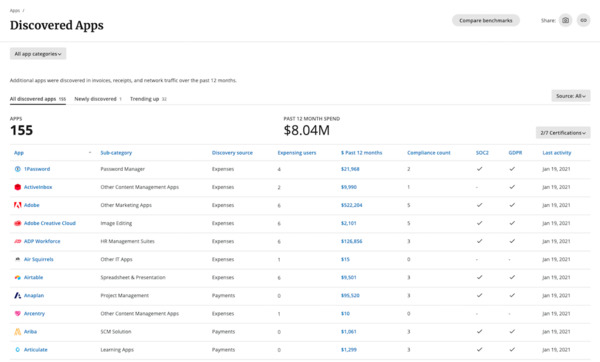 If you’re not aware of all of the apps in your organization, you can’t manage them.

This raises budget risks as well as larger threats to organizational security and compliance.

Statistic 5: Over Three-Quarters of IT Executives Rely on Reactive Measures for SaaS Subscription Management

Researchers at Productiv reported that 77% of IT executives rely on reactive measures to manage subscriptions and gauge their effectiveness. 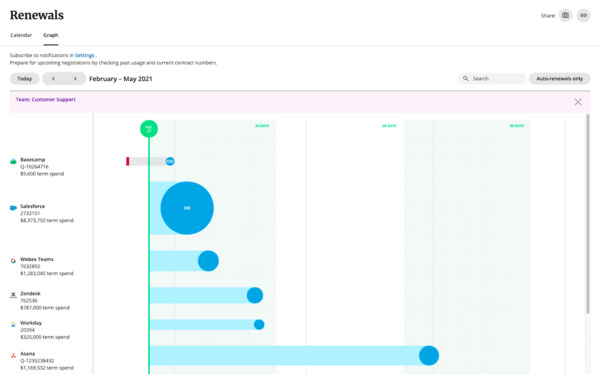 “Reactive” measures means that the app or vendor notifies IT administrators about usage rates (and from there, decision-makers conclude whether an app is useful to the company or not). This isn’t a great way to make decisions about apps and IT spend; these notifications are coming from the vendor trying to ensure you keep using the app. In addition, the stats don’t come in real-time, so you don’t have the most accurate information on hand to make the right choice.

As a result, you might wind up investing in an app that isn’t as useful to your company as you think it is. That’s where Productiv comes in.

Productiv gives you real-time information on SaaS app usage and adoption, so you can see whether an app drives productivity or if it’s not gaining traction. With that information, you can invest in the right apps for your company and save time and money.

Statistic 6 & 7: IT Executives Don’t Know Which Apps Are Actually Over-Licensed

Productiv’s 2020 report on the state of SaaS management also revealed that 40% of IT executives believe Zoom is over-licensed.

Yet, Productiv’s own data doesn’t bear this out: Zoom has 75% user engagement. 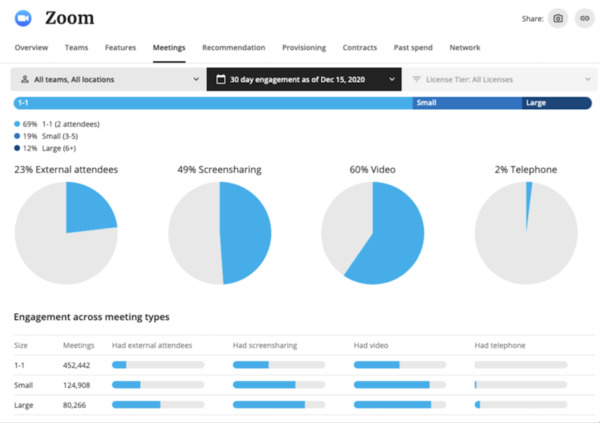 Based on Productiv’s SaaS statistics, Zoom isn’t over-licensed because many employees use the app frequently, and they also utilize premium features.

If you don’t have real-time data from Productiv, you might assume that you’ve got too many licenses for a popular application. However, that might not be the case. With Productiv’s data, you can make the right decisions for your company.

Statistic 8: The Vast Majority of IT Executives Believe Manual SaaS Management Is a Bad Idea

94% of IT executives believe manual SaaS management methods lead to poor decision-making about SaaS spending. It’s not hard to understand why: manual SaaS management methods are time-consuming and error-ridden. A spreadsheet won’t automatically update when you add a new SaaS license, and there are too many moving parts to track within a spreadsheet. 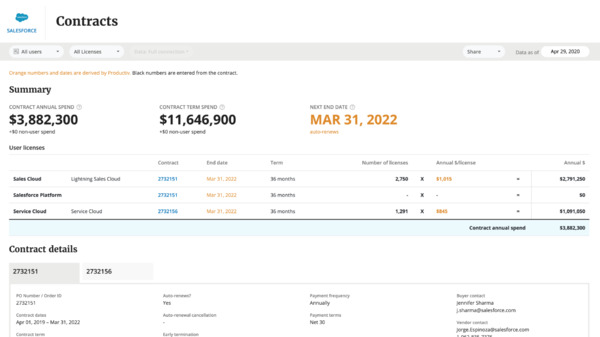 2021 shouldn’t be the year in which you keep saying manual SaaS management is a bad idea, but you don’t do anything about it. Productiv automates SaaS management so you invest in the apps that drive your firm forward.

Almost 90% of IT executives believe that a centralized SaaS management solution would offer these three benefits:

In an interview with MobileIron CIO Sumit Johar, he commented that Productiv helps his team efficiently identify SaaS apps in use at the company. The IT team at MobileIron used to run three-week audits every quarter to discover SaaS apps across the organization; Productiv streamlines that process and even helped the team discover at least 30 apps they had never found in their audits.

Again, this is the year to put those beliefs about centralized SaaS management into action. With Productiv, you simplify the SaaS management process by automating it. In turn, you gain increased visibility into SaaS applications. Thanks to Productiv, your teams don’t spend their time managing SaaS apps – they focus on strategic initiatives that create value for your business.

Make 2021 the Year You Manage SaaS Apps Effectively with Productiv

Don’t let ineffective SaaS management hurt your company for yet another year. Turn to Productiv for real-time insights into app engagement, usage, compliance, contractual obligations, and more. With that information, you can make the right decisions about SaaS application investment.

Find out how Productiv gives you a kick in the SaaS.